Samsung’s best effort from this year is still not enough to beat Apple’s from last year. Why do people buy Samsung products again? I’m back to trying to use SA profile keycaps on ErgoDox. I found that in the first couple days, the SA key’s high profile was making it difficult to type, and thus quite difficult to become accustomed to the ErgoDox layout. For a few days last week I switched to DSA profile keycaps. I’ve now gone back to SA, and having a week of ErgoDox under my belt I find SA to work quite well.

I couldn’t help but note the difference in height between DSA (right) and SA (left). SA is high, thick, ABS, but I didn’t realize how big the height difference was until now. Work on my building my test ErgoDox is complete. I knew going into this build that I would need to improvise a lot, since this type of build (RGB Underglow) is not officially supported. I’ll say that the decision to order two PCBs was a good one. Knowing that the first board was for testing and experimenting removed a lot of my stress. Typically when attempting something like this I’m quite stressful that I’ll somehow destroy the board during the build. Given that I had 2 complete sets of PCBs + electronics made me worry free. Final assembly went as I expected. The USB breakouts worked great as a replacement for the standard TRRS connections, and the RGB underglow looks great. Notably, I did need to make a custom USB cable for this build, featuring mini USB B connectors on both ends, and wiring with 5 wires instead of USB’s standard 4. I chose Cherry MX blacks for this test build, topped with sculpted SA profile Modern Selectric keycaps from Clueboard. This is my first time using SA profile keycaps, thus far I’m in love with them. I’ve been eyeing several SA profile keycap sets over the past year, this is the first time I’ve pulled the trigger. These keycaps will likely end up on the final production board. I’ve began using this test board as my daily driver, to accustom myself to the layout. I’m very pleased with how easily I’ve picked up the style for using this board. I find the main keys to be pretty easy to get used to, and I’ve finally found an ortholinear layout that I like. I am still getting accustomed to the thumb clusters though. Moving forward, I simply need to finalize my modifications to the case design, order the carbon fiber plate, and assemble the final production board. Assuming I order sometime in the next few weeks I should be on track for completion of the production board by October. 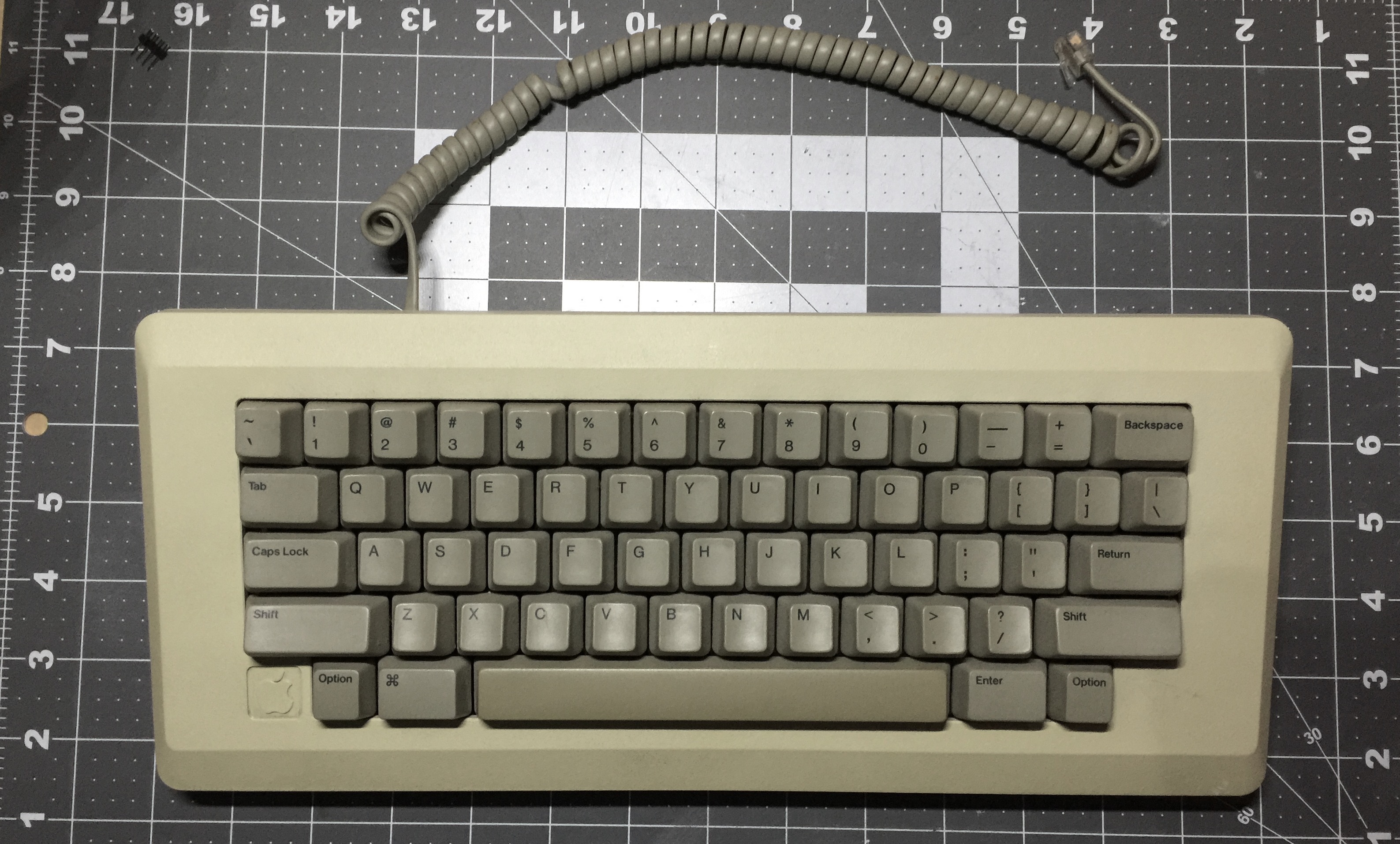 I’ve been on the hunt for an Apple M0110 for ages. As an Apple fanboy and keyboard wonk, a properly restored M0110 is nearly as compelling as my very first mech - a 60% version of Apple’s AEKII.

The M0110 is the board that shipped with the original 128K Macintosh in 1984. In good condition these boards typically go for north of $100. After months of waiting for the right board, I was able to snatch this one for a mere $35 shipped. Unlike most examples at this price point, this one has all keycaps present, and only medium yellowing.

I’m quite busy at the moment with my ErgoDox build, so it may be some time before I get to this board. The plan is do perform a restoration similar to lowpoly’s. After quite a few custom boards, this project will be my first time building a hand-wired board. This will also be my first time retrobrighting something. As long as ErgoDox doesn’t take too long, I hope to have this fully restored by the end of the year.

Basic RGB LED strip functionality has been implemented. I spent 3 days bashing my head against my desk trying to figure out how to implement this and get the firmware to compile successfully. It turns out I’m not the first person to implement RGB LEDs on an ErgoDox; u/wootpatoot on Reddit already built such a board. With a basic working firmware up and running, I can now begin work on trying to implement the strip on the left hand.

Presently I’ve got the RGB strip wired to the Teensy’s D5 pin, typically an unused port on ErgoDox. The next goal is to get the strip up and running on B6, and hopefully be able to control a strip on the left-hand without making any modifications to the PCB. B6 normally controls a standard LED on the right hand. Assuming my understanding of the PCB design is correct, signals sent on B6 are also sent (but not used) to the left hand as well. I’m hoping to get power from the left hand’s unused USB pinout, and that the B6 signals just automatically carry over to the left hand.

Worst case scenario, I can do like u/wootpatoot did, and run an additional wire over to the left hand - but I’m hoping to avoid that.

After many more days of pounding my head against my desk, I’ve been unable to find a way to drive the LED strip from the I/O expander. I’ve resigned myself to the fact that I’ll need to run a 5th wire over to the left hand to drive the strip.

The problem: ErgoDox is designed to use a 4 pin TRRS port & cable to connect the two hands. 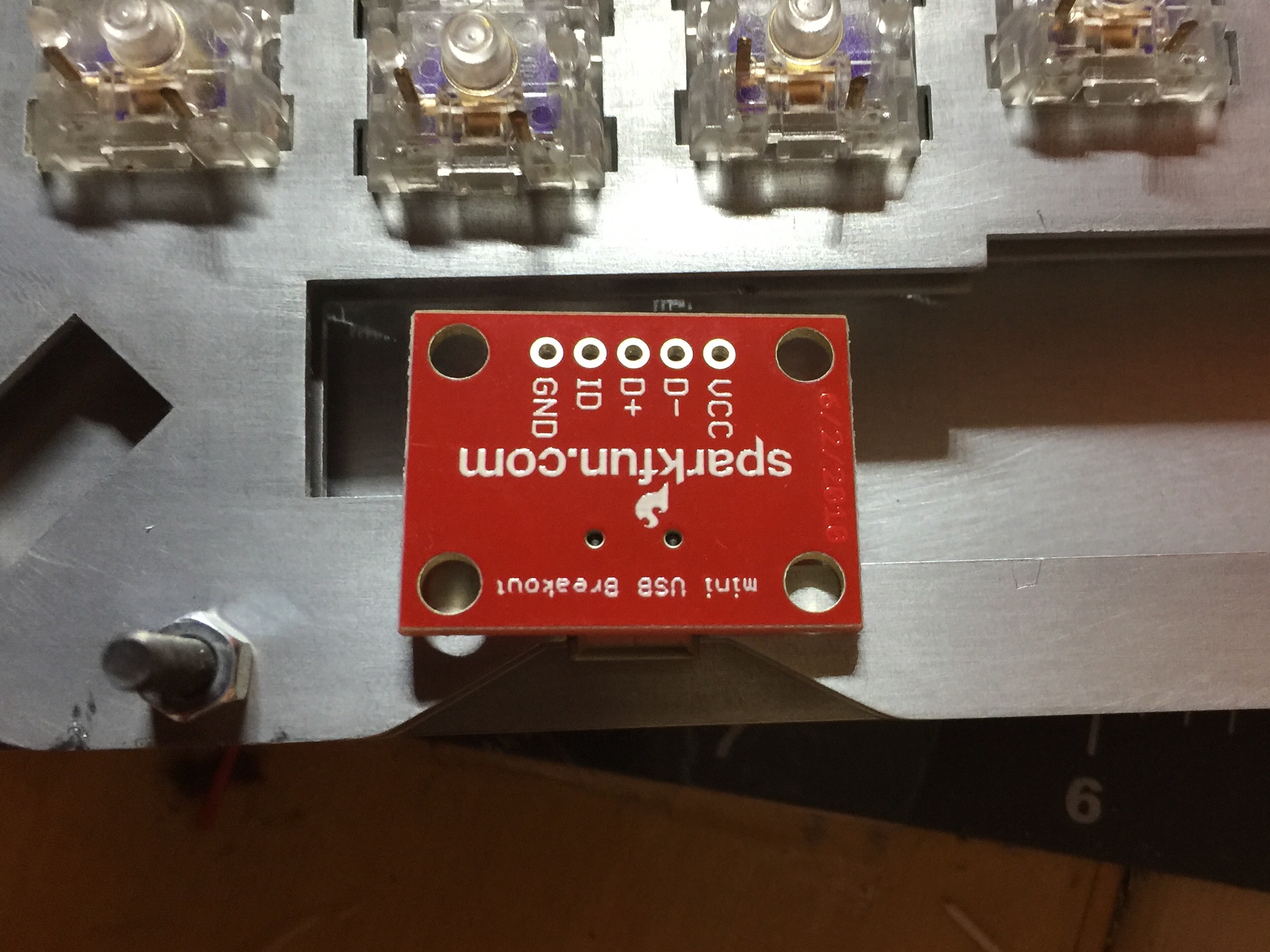 Solution: I’ll use a mini-USB port instead, and run a cable with mini-USB on either end to connect the two hands.

I ordered and received a breakout board from Sparkfun. I’ll wire the board to the pinouts normally used for TRRS. 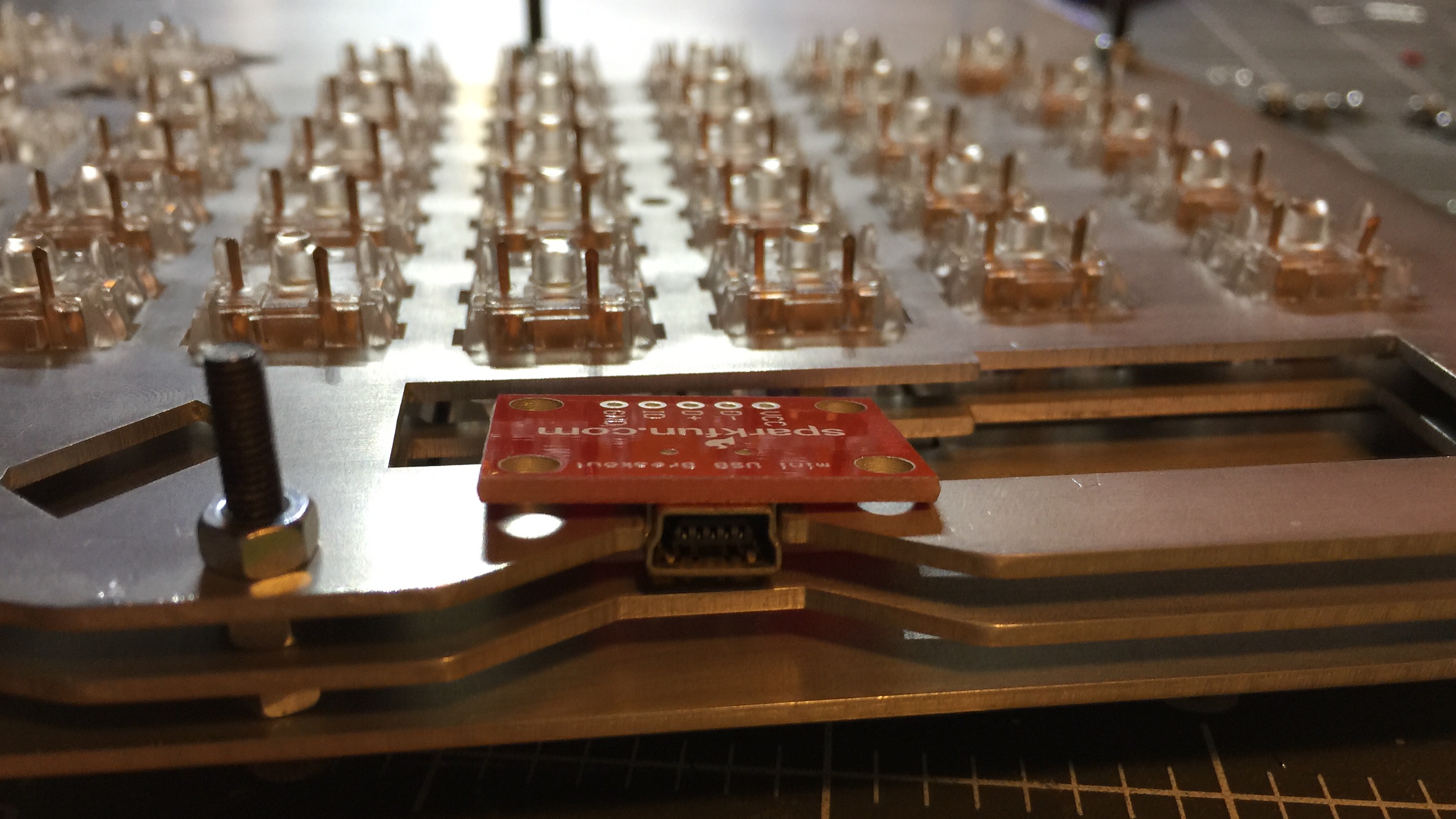 Fortunately, the mini-USB port & breakout board will fit perfectly in the case. I’m hoping mounting the board to the case with hot glue will be sufficient. If all else, when I order the final carbon fiber plate for the production build I will add screw holes to mount the board to the plate.

Testing with the breakout board was successful. It’s wired up how I expected, and working perfectly. I frankensteined a test cable with male USB mini B ends out of two regular USB cables. For the production board I’ll have a proper paracord cable. Mounting the board to the frame with hot glue worked better than I expected. I’ll still design the production carbon fiber case to have screw mounts, but hot glue will be great to fall back on. I sorted out plate spacing and got RGB strips installed on the test right hand. I’ll need to make some slight changes to the plate design for the production board in order to allow easier routing of the power and data wires do the strip on the bottom.

As I’ve got it set up presently, there are 5 LEDs on the middle plate, and an additional 5 on the bottom plate. Between both hands this that will mean 20 LEDs - the upper power limit for USB. The LEDs look great in this case. Hopefully they will look even better in the carbon fiber case. Most RGB underglow uses a frosted acrylic, but this build will not. With nothing to diffuse the light, the glow is a bit more subtle that other boards, but it’s exactly the look I was shooting for.

In the picture above, notice that some of the light also shines through the PCB. I wasn’t expecting this, but I anticipate that it will shine through the clear cases of the zealio switches on the production board, adding even more color.

Testing is moving a full speed and is nearly complete. I imagine I will make the final changes to the case design and get that ordered within the next two weeks.